Among Gods! RPG Adventure is a fantasy RPG adventure developed by Century Games Publishing and is now available for all Android and iOS devices. The game runs through a storyline where players have to play the role of the heroes and fight against evil for a peaceful world. There are so many superheroes that players might get confused while building their team. Fret not, we have summarized the Heroes from Among Gods RPG Adventure Heroes according to their strengths in this Tier List.

This Tier List helps the players to choose wisely between the heroes present in the game. Thus, go through the following information and figure out the powerful heroes. This Tier List is divided into categories of SS, S, A, and B.

Best Meta Heroes from each class for Among Gods! RPG Adventure in September 2022

Every hero has different skills and abilities that make them unique in their own way. Thus, the player must know which hero will be best suited for every step the player takes in this journey. The heroes are hereby classified under five categories based on their abilities and powers. So here are the best players from each category so that players don’t get confused while building up their army.

Heroes under the Justice category are the ones who have overcome some past incidence and have now devoted their lives to mankind or their people. Mata Hari is the most powerful hero in this category of Justice. She is a world-class spy and lures her opponents with her beauty.

Her attack, the Lethal Kiss is one of the deadliest attacks in the game. Opponents who get struck by this attack deal with great damage and even die due to this attack. If the opponent dies then Mata Hari gets her health restored up to 30% for 10 seconds.

The heroes of the Neutral category are great warriors and the best one indeed is Darius the Great. He has devoted himself to his empire and has fought to save his people. The character has great courage and talent in his field which he uses to protect his empire.

Rule with Majesty is the most dangerous attack used by Darius. While he uses this, the enemies sense a field of force surrounding them which then pushes them towards Darius. This effect causes a heavy earthquake and thus enemies end up accumulating huge damage.

The Evil heroes use evil powers to flourish themselves on the battlefield. Nostradamus is a plague victim with a great knowledge of medicines. He has a great warrior within himself which helps him become the best hero of the Evils.

The Holy categories are filled with the gods who fight for humanity. Joan of Arc is the best character in this category due to her immense godly powers. She has two perspectives of herself, one is her god form which has the powers of the God of Light and the other is her two souls which be together but get separated at times.

Joan of Arc’s best attack is the Exaltation of Light which helps her to resist all the damage for 5 seconds. She can also restore her health by converting the damages received her.

The Corrupt hero’s category is filled with those heroes who don’t think twice before executing their opponents. Harald is one of them and is the strongest among all the others. Harald never feared facing death ever due to her intense childhood moments crumbling through battlefields.

Endless Torture is the most powerful move made by Harald in the fight. It makes it immortal for 6 seconds. This move also generates a shield and helps him gain 50% of his health. Harald can defeat opponents present 3 meters of distance from him and they deal damage that reduces up to 72% of their health.

Read our other articles on Among Gods! RPG Adventure here

What do you think about this Among Gods RPG Adventure Heroes Tier List? Let us know your opinions in the comments below! 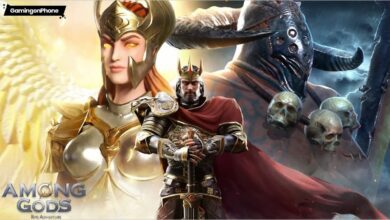 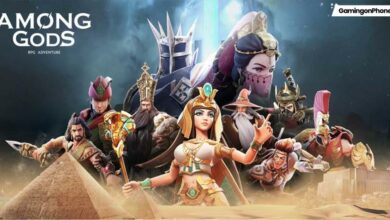 Among Gods! RPG Adventure is now globally available on both Android and iOS