The mobile app stores aren’t short of a strategy RPG or two, but some are more memorable than others. Clash of Gods is shaping up to be one of the good ones, with a truly global cast of gods and monsters to summon, level up, customize, fuse, and hurl into battle. There’s an epic single-player campaign, with more quests than you can count. But the multiplayer is just as epic, whether you’re joining your friends in a guild or smashing their heads off in the arena. We could go on listing the reasons we’re excited to play Clash of Gods, but for space, we’ve limited ourselves to just seven.

When it comes to mobile RPG storylines, our motto is “go big or go home”. The smallest screen calls for the biggest battles, and Clash of Gods delivers. You could guess as much from the title. This is a game that pits gods against heroes,  and legendary monsters against mythical beings, and it does so at great length. There are dozens of campaigns in Clash of Gods, and thousands of quests. They all play out on the most sprawling canvas imaginable.

2. The Diverse Representation of World Cultures

Clash of Gods is a global game, and it features a global cast of gods and legendary heroes. The starting line-up alone consists of Brynhildr, Thor, Wukong, Amun, and Athena. In case you need a history lesson, both Brynhildr and Thor are figures from Nordic culture (and the Marvel Cinematic Universe, of course).

Wukong, meanwhile, is better known as the Monkey King, a central figure in Chinese literature. Amun is an Ancient Egyptian god-king who was fused with Ra, the sun god, and Athena the Ancient Greek goddess of Wisdom. Everybody knows that. What most people don’t realize, however, is that she’s also the god of warfare.

Clash of Gods is a strategy game with a capital S. Not only does it boast a wide selection of Ancients, all with their unique strengths and abilities, but it gives you a ton of unit types to manage, too. There’s infantry, cavalry, archers, legendary beasts, and more, all of them bringing their particular brand of pain.

Success means evolving your approach constantly. Before every battle you’ll need to ensure that you’re fielding the most effective combination of units for the task at hand, taking advantage of synergies, skills, and so on.

It’s the little extras that make all the difference. Clash of Gods has everything you’d expect to find in a top-tier mobile strategy RPG, but it throws a couple of neat innovations in for good measure.

Like the transfer system. This neat feature lets you transfer the stats of one Ancient to another, increasing the former’s stats at the expense of the latter. This is only possible between cards of the same Quality and Fusion Level. Naturally, the process isn’t entirely free. You need to spend Transfer Tickets – but that’s a small price to pay for the flexibility the transfer system gives you.

It’s also important to get the basics right. Clash of Gods features an intuitive Power Level system that ensures you won’t spend too much time scratching your head or weighing up costs and benefits.

Your Hero always has the Power Level of your strongest team. This means you can swap Heroes in and out without your overall Power Level dropping. The upshot is that you can get more powerful, but not less. That seems like a good deal to us.

No strategy RPG is complete without PvP. Clash of Gods nails this feature, providing an arena mode that’s both involved and straightforward to understand.

Whoever you are, you always start at the bottom at the beginning of every season. As you fight other players you earn Arena Points, and once you’ve reached 120 you get to play in the Advanced Game. Here the goal is to win a best-of-five match to advance to the next rank, with higher ranks earning better rewards.

There’s plenty of evidence to show Clash of Gods isn’t play to win either, as you’ll have chances every day to summon characters for free. There’s even a special code you can redeem for extra rewards. Just use the code COG9999 at this link. So what are you waiting for? Get involved by downloading Clash of Gods by clicking here.

That’s all about the seven reasons why you should play Clash of Gods! Try the game and let us know what you think about it in the comments below! 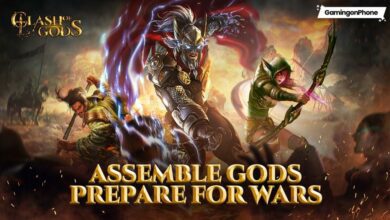