NetEase announces the crossover of the popular role-playing and survival horror game Identity V and the famous Japanese manga series Case Closed (Detective Conan) at the Chinese Mainland in COAIV 2020. During the 3rd anniversary of Identity V, it was officially announced that the crossover of these two popular organizations will release in the late autumn of 2021 and will be available in the global version.

The new PV The Quest for the Mysterious Manor Staged Again! was announced at the 3rd Anniversary ceremony of Identity V. The story revolves around a sudden gunshot that broke the silence of an ancient and dark manor. The detective looked for a trace and suddenly opens the door which was locked in dust for ages.

The characters who will receive a skin are

About Identity V and Case Closed

The popular anime television series Case Closed (Detective Conan) is adapted from Gosho Aoyama’s comics under the same name. The series has been on for 25 years since its premiere on January 8, 1996, known as a famous evergreen show in animation history. Case Closed (Detective Conan) is about the story of Shinichi Kudo, a high school student detective who witnessed one evil transaction and therefore was poisoned by the black organization. His body shrank afterward to the size of an elementary school student. He then disguised himself in the new identity to look for the antidote while investigating criminal cases. In the mysterious Oletus Manor, suspenseful events happened. Can detective Conan see through the truth this time?

Identity V is also a game full of suspense and tension. When facing mysteries and dilemmas, one needs to stay clear-headed to find the truth. The crossover shows the pursuit of justice and belief from both two works and the matching core of spirit will definitely make the crossover a shocking and impressive one!

How much are you excited about the global release of Identity V × Detective Conan? Let us know in the comments below. 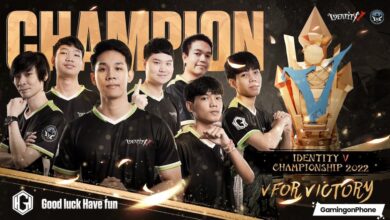