Kick-Flight is a player vs player action game created by the Japanese developer, Grenge Inc. It’s a real-time battle game based entirely in mid-air. This mobile game has brought an entirely different concept to our mobile screens. So at first, the beginners may get into little confusion to understand the game. In this Kick-Flight beginner’s guide, we will explain all the features to help you understand the game.

Once you download and start Kick-Flight, it will take you through a simple tutorial that explains the controls and the user interface.

The controls are as follows:

‘Kickers’ are the characters you can get in the game. Once you start the game, you will automatically be given Tsubame(pronounced su-bam-ay).

There are also different types of kickers. These include the following types: speed, support, tank, and attack. Speed kickers are really fast, support kickers help the team (by giving buffs, health, attack speed, etc.), tank kickers have higher health and attack kickers have a higher damage per second(DPS). They also have disc compatibility, which means they have different reactions to different types of discs (eg. attack or ATK discs become slower but heal discs can be used faster). This can be found while looking at the info tab of the Kicker you are using.

Bonus Tip: Practise different Kickers’ moves and find the Kicker that suits you. Kickers can also be obtained in the shop using the tickets you receive by completing daily challenges. To obtain more kickers, Click on the capsule icon or swipe left from the homepage, then click ‘Kicker’ on the top of the screen and tap the ‘scout’ tab under the ‘regular scout’ box. The bottom is for cosmetics only.

Each character offers a different ability, attack, health, and speed. For the beginners, we suggest Tsubame, Coco and Pitophy to start with. Additional info on them can be found on the Kicker info.

Discs or attributes are special skills used in battle to fight enemies. There are 5 disc types. These include attack, heal, warp, buff and trap. They all do what their names suggest. The discs have a gacha-type gathering style where you open capsules (earned by winning or buying) and receive some discs to add to your collection. The rarities include N (normal), R (rare), SR (Super rare) and UR (Ultra rare). Each disc has a different ability. One might heal you, teleport you, give you buffs, etc. You unlock more discs as you rank up. So make sure to use discs that are good for your kicker of choice!

Each individual kicker has different skills. There are two different types of skills: special and kicker skills.

The special skill is similar to an ‘ultimate’ in ‘Overwatch’ and ‘Apex Legends’. As you move around and attack, the ring around the special skill button fills up. Once it fills up, you can press it to activate your special skill.

The kicker skill is the disc type icon above the special skill button. Instead of a ring that fills up, it has a countdown timer which indicates when it can be used again. Just activate it just like a normal disc. Make sure to know your kickers’ move set properly.

Scramble Mode is the first mode you unlock. In this mode, you fly around stages in a team of 4 players, whilst collecting crystals. With a time limit of 3 minutes, the aim is to collect as many crystals as you can, store them, and fight other teams whilst doing that. The team holding the most crystals at the end of the game wins.

As you win matches, you get 50 points to add to your rank. You start at C rank, then C+, then B and B+ etc. but be careful as if you lose a game you lose 10 points. As you rank up, you will unlock different game modes like Flag Fight and Rapid Ball.

The Kicker Element you are using can be found in the triangle next to your health bar. You can also view the enemy’s element by looking at their colored triangle.

Depending on the selected element you have, you deal/take more or less damage from your opponent. For a beginner, it can take some time to understand this. Hopefully, this Kick-flight guide will help you to understand it.

To change your element, flick down on the disc that has the same color as the element you want to change to. This is why it is essential to have a variety of different types of discs in your deck.

We hope you’ll find this Kick Flight guide useful. If you have any questions regarding the game, drop them below in the comments. 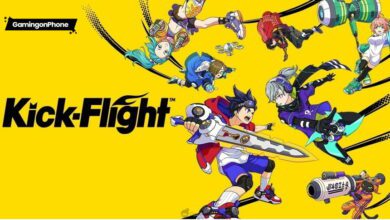 Kick Flight will be closing down the servers from March 22, 2021 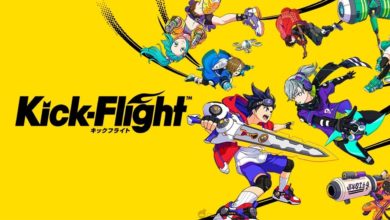