Land of Empires: Immortal is a strategy game developed by Nuverse. This game brings you back to reclaim the territory that has been looted by the demons, to reclaim the area, we need a hero to fight the demons and can lead his troops as well for human survival. Fret not, we will help you by providing our Land of Empires: Immortal Tier List of all the heroes in the game.

If you want to get a hero with a high grade, you can recruit him through the Recruit Hero from the Hall of Heroes building, there are two choices, first, there is an Epic Recruit with the unit price of the Epic Fate Stone for 3000 diamonds. The second is the Advanced Fate Stone with a unit price of 800 diamonds. If you want to get a hero whose grade is high, then you need to recruit from Epic Recruit, because there has a higher chance, because it matches the price too. Provided you need to collect the shard from the hero if it is sufficient then you can unlock it.

In this game, there are three roles, first, there is Infantry who usually leads troops and are in the front position, therefore this infantry has skills that can withstand damage from enemies. Then there is the Cavalry, this role is behind the infantry during the field battle to assist the attack, besides that this cavalry has skills that can do a lot of damage to the enemy as well. The third is Archer, this role is at the back because it usually has weak defense stats, so it is positioned at the back. Although weak, this archer is very good in attack, especially in long-range attacks because of his possible skills.

This Land of Empires: Immortal tier list should only be taken as a reference because different strategies and compositions can yield different results for players. This tier list will be separated into categories of S, A, and B as follows:

Best Meta Heroes for Land of Empires: Immortal in June 2022

Following the composition during battle, namely the balance between infantry, cavalry, and archer, and judging by the uniqueness of the skills it has and the contribution of damage, resistance and others, we recommend the following heroes:

The infantry here is at the very front to withstand damage and lead the troops, so we choose a hero who has good resistance skills like Caesar, because it can reduce the damage received by -20% when solo and -4% when troops, and has control immunity. The second is Heracles, just like Caesar, he can reduce the damage received by -30%, more than Caesar, but he does not have Control Immunity.

Cavalry here is positioned in the middle to assist the attack because the damage it has is quite large. We chose Valkryie here because it can do damage to random enemies who have an area in front of you 10 times, this skill is very suitable for use when the enemy is in large numbers. The second is Nefertari because this hero has a unique skill, which is to give poison to the enemy for 6 seconds.

The heroes in the Land of Empire: Immortal game are very influential in the battle for victory, but you also need to improve the heroes you have, so your heroes will be stronger and easier to win battles.

What do you think about this Land of Empires: Immortal Hero Tier List? Let us know your opinions in the comments below! 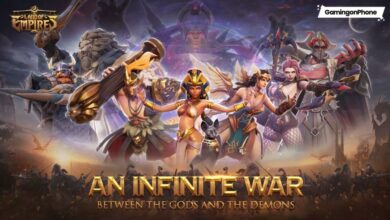