Pokémon Unite has been climbing the charts among other games in the MOBA genre with its recent release on mobile devices. The first update after its release revealed the addition of a new Pokémon in the game, Mamoswine along with a sneak peek of an upcoming Pokémon Sylveon. Patch 1.2 was a minor update including the addition of a new Defender and a few bug fixes among other adjustments. With the addition of a new Pokémon, the meta has shifted slightly but most of the Pokémon are still pretty much in the same spot as when the game was first released. However, we will be providing the new and updated version of the Pokemon Unite October 2021 Tier list for Patch 1.2 for players looking to climb their ranks faster with the strongest Pokémon in the game.

The tier list will be separated into 5 categories of S, A, B, C, D.

Lucario is probably one of the best Pokémon in the game right now despite the recent nerf on Power-up Punch in the last patch which did not seem to do much. He also had a bug on his Extreme Speed special ability which dealt an insane amount of damage but the bug has since been removed and he is still performing incredibly well both early and late-game due to his high mobility kit.

The cooldown reset on his abilities allows him to spam his special attacks dealing massive amounts of damage and knocking out the enemy in a few single blows. The item that really buffs Lucario, even more, is Razor Claw which synergizes incredibly with his kit making him top of the game, top of the meta pick for this patch.

One of the tankiest attackers in the game, Venusaur seems to outperform almost every attacker in the game at the moment dealing massive amounts of damage both the early game and late game. Venusaur was already in a very good position with his Sludge Bomb and Solar Beam build but the buff on Petal Dance and Giga Drain puts him above most attackers due to his high sustainability from Giga Drain making him almost suitable for the role of an All-Rounder. The speed buff on Petal Dance gives him good mobility and he might be suitable for the role of a jungler in the current meta but that is yet to see.

Cinderace got a massive buff in the last patch with increased damage on Pyro Ball and reduced cooldown on both Pyro Ball and Flame Charge making him one of the best attackers in both early and late game. He has since then climbed the ranks among his peers giving him a comfortable position of high A, low S tier.

One of the biggest advantages of Cinderace is the spectacular synergy of his passive with Razor Claw. His passive allows him to deal bonus damage on every basic attack used after an ability while Razor Claw also gives Cinderace a boosted attack after every move making his passive damage insane.

Hands down one of the best Pokémon in the game, Zeraora is a multi-dimensional character who can be played both as a Jungler and as a laner successfully winning in both. His high skill-cap makes him a difficult Pokémon to master, but in the right hands, he has the capability of solo carrying his team to victory.

The recent buffs have made him a very strong early game character, leveling up faster than many of the other Pokémon in the game. Additionally, his synergy mainly with Venusaur would be deadly for the opponents since Venusaur’s Petal Dance and Zeraora’s Discharge together would completely obliterate the enemy making them both one-shot during the later stages of the game.

Blastoise received some minor adjustments in the previous patch which didn’t really affect his viability apparently because he is still sitting comfortably at the top of the tier list as a defender who deals massive amounts of damage, has the capability to absorb tons of incoming damage, and has possibly one of the best Unite Moves in the game.

His Unite Move alone can turn the tide of the game within seconds dealing massive amounts of damage along with its potential to steal objectives.

Almost all the supporters are high tier in the current meta but Blissey stands out among all of them mainly for her extremely versatile kit and the potential to absorb massive amounts of incoming damage. Her kit involves buffing ally champions, clearing all CC, and healing her allies along with dealing damage from Egg Bomb which also slows her enemies giving her team time to dive in and secure the kill.

Eldegoss follows closely behind with almost the same kit and more mobility but having less sustainability in the lane giving Blissey the extra edge and putting her above all the supporters though it should be noted here that all the supporters are currently in the meta.

Currently, the meta consists of mostly burst Pokémon and while the tier list presents the strongest Pokémon in the game right now, does not mean that those ranked slightly lower are not good. The use of Pokémon varies from player to player. In addition, a new laning meta is slowly emerging which is distinguished from the traditional laning of 2–1–2 in which 2 pokémon would go top, 1 mid, and 2 bottom.

The new meta is 1 – 1 – 3 which means 1 top, 1 mid, and 3 bottom though this formation is usually seen in the higher elos and not as frequent in the lower elos. We recommend players to always try out new Pokémon and to not be discouraged if their favorite Pokémon is not ranked high since tier lists are based on overall stats and not on an individual player’s skills. Some off-meta picks can end up shining unexpectedly so players should always keep an open mind and a healthy gaming environment. 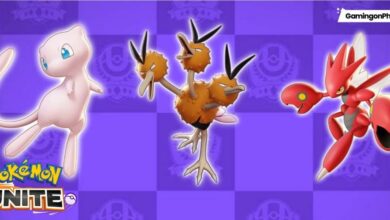