The tactics are a huge part of the road to success in Sports, and so is in Soccer Manager 2021. You are able to modify a bunch of different settings as well as choose your own formation. This guide should help you in understanding what everything means in the Soccer Manager 2021 Tactics section.

Each position in your starting 11 is given a role, which is how you would like them to play. All players have a preferred role however, you are still able to put players into roles that are not in their preferences. Therefore, remember that this will definitely have an effect on how they perform in matches. Here are all the possible roles for each position and what they mean.

Performs just as any keeper, with the responsibility of protecting the goal.

Basically a Sweeper Keeper. This is a goalie that is quick and fast and is able to come off the goal-line to clear the ball. This basically means that your goalkeeper plays both as the keeper and as the last man back. Very few goalkeepers are capable of this role.

The basic role of a Center-Back. These defenders are well-balanced in terms of their defensive abilities

As the name suggests, this type of Center-Back. will be the main tackle-maker, playing more defensive as the Center-Back.

The opposite of the Stopper. This kind of CB will be looking to create a play with his strong passing abilities.

Plays a more defensive role and stays back while attacking.

Plays a defensive role in the midfield, making the tackles in the middle of the pitch

Tends to start the play deep in the midfield, playing passes forward from the deep midfield.

Helps out in both attack and defense, moving up and down the pitch. Usually fits with a well-rounded midfielder with good stamina

Similar to the General Defender, this role is a basic and balanced role for midfield players

Tends to control the midfield with his presence, supplying his surrounding teammates.

Focuses on providing chances for attacking players rather than for the entire team.

Plays as a normal midfielder but positions far out wide. Tends to provide support in both attack and defense

Plays wide but focuses mainly on coming forward and providing for the attacking players.

Plays like a winger, but focuses on scoring goals rather than providing assists. It is better to play the wide forward with an inverted foot, to allow for cutting in

The basic role for an attacker, well balanced like the General Defender and Midfielder

Setting your team instructions will result in how your team will play football in a match. You will need to make sure that this will fit in with your formation and the quality of your players.

This will be the basic mentality of how your team will play. You should keep this balanced beforehand and then change in-game.

Determines the overall speed of play. Thus, this will have an effect on how the speed at which the ball is moved. If you have high chemistry, a fast tempo will be quite effective.

How strict you want to be with the players. High creativity will therefore result in players moving about playing adventurous passes. Whereas, Low creativity will mean that players will tend to stick to a position and play simple and safe passes.

Can be set to “Short”, “Direct”, “Longball” and “Mixed“. This will contribute to the creativity of the team and how they play whilst in possession.

Relates to the are at which your team will attack. This can be down the middle, or down the flanks. Choose this setting based on your formation and how many players are in those attacking areas.

This determines how your wide players will get the ball central. They can either work the ball into the box, play early crosses, or play late byline crosses, or have a mix. Byline crosses work best when your wide players are inverted (use the opposite foot to the side on the pitch, such as a left-footed RW). Working the ball into the box is better for central play, whilst crosses work better with Target Man strikers.

Can be set to your own area, your own half, or all over. The larger the pressing area, the more pressure there will be. However, a larger area to cover will also tire out your players. It is best to switch to pressing all over whilst your team is losing.

Can be normal, hard, or aggressive. The stronger the tackle, the likelier it is to get the ball off the opponent, however, it is also a lot riskier. Aggressive tackling results in a higher number of fouls.

Determines the position at which the backline sits. This can be high upfield, or deep downfield, or balanced. A high backline will be a lot more attacking but leaves a lot of space behind the defense for attackers to run into on the counter. A deep backline plays more defensive, allowing for less room for the opposition to attack. However, this will reduce the numbers in attack.

Did you find this Soccer Manager 2021 Tactics explanations useful? If you have any questions or suggestions, feel free to drop them in the comment section below.

Thank you, for the help 🙂 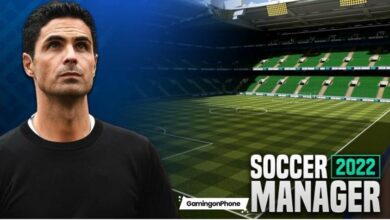