Vietnamese team V Gaming has been crowned as the champions of Arena of Valor International Championship (AIC) 2022 after beating ONE Team with a scoreline of 4-1. The team will be taking home a handsome amount of $700,000 as the tournament champions. The runners-up ONE Team will be heading home with $350,000 as prize money.

After becoming the runners-up of the Arena of Valor International Championship (AIC) 2021, V Gaming came into 2022 with a hunger to clinch the trophy this time. The start of the tournament was not so good for V Gaming. In Group Stage Phase 1, they lost two matches, but still qualified for Phase 2 with only one win in their bag. In Phase 2, the team started picking up their form. They topped Group D with 4 points, as they qualified for the Knockout Stage.

The team had a smooth ride in the knockout stage. V Gaming won their first knockout match with a dominating score of 3-0 against Team Flash.  In their second Knockout stage match, V Gaming faced Group C winner Taiwanese team Bikertopia Esports. They also showed a spirited performance in this match, as they won the game with a scoreline of 4-1 and qualified for the Upper Bracket Final.

Sweet revenge of V Gaming in the Grand Finals

After a 4-1 loss against ONE Team, V Gaming faced them again in the Grand Finals. Coming into the series, ONE Team was undoubtedly the favorite for the title. But V Gaming was hungry for revenge with a lot of confidence and a peak form.

V Gaming started the finale with a bad loss. They looked good throughout the match until they made a fatal mistake in the dragon’s cave which wiped out the whole Team. However, the team proved its capability in the next four matches. V Gaming made an outstanding performance in the following games, won the remaining matches, becoming the tournament champions of Arena of Valor (AIC) 2022.

The team consisting of BirdLB, QuangHai, Maris, HoàngTĐ, Han had shown a spectacular performance throughout the tournament, and kept their nerves in check, despite going 1-0 down at the start of the final. In addition, Nguyen “Maris” Quoc Huy, V Gaming’s mid laner also became the tournament’s best player (FMVP) with a top performance during his journey to becoming the new king of AIC 2022.

What are your thoughts on V Gaming winning the title of Arena of Valor International Championship (AIC) 2022? Do let us know in the comments below! 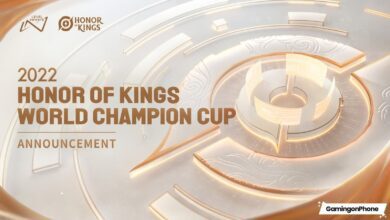