Rush Royale: Tower Defense TD, is a tower defense strategy game with a PvP feature. The PvP gameplay is the main feature of this game and is very simple and easy to learn. The game offers a PvP feature to the players, so they will not only be fighting to defend their gate from the monster waves but will also fight against other players. In our guide, we will discuss how to play Rush Royale: Tower Defense TD PvP mode.

This is a PvP game, so you want to win against other players. To do so, you must prepare your best cards. You want to show off your strongest card to your opponent. We are sure that you already know how to level up your card. You must use your high-level card to defeat the opponent.

The stronger your card is the harder your opponent will find it to win, this is not only because you can defeat the monster wave faster than your opponent, but also, the monsters that you defeated, will be teleported to your opponent’s field, so make sure you have your strongest cards.

In PvP mode one of the keys to victory is paying attention to the minute details during the battle. If you pay attention, you will see three heart symbols and a row monster symbol near it, we are sure you all know what the heart symbol represents! It is obviously to show how many lives you have left. You will lose your life when a monster reaches your gate, a normal monster will take one life from you, but a mini-boss and a boss will take two lives from you.

Then there is the monster symbol, which represents how many monsters are marching towards your gate, if there are a lot of monsters, then there will be a row of them. If you manage to defeat them right after when they appear from the portal, then there will be two or three symbols showing on your screen.

The important thing here is you can see what cards your opponent brings. It will be shown on top of your screen. There you can see the cards and their stats. The stats here are the stats of upgrades in the gameplay. In Rush Royale: Tower Defense TD you can level up the power stats of your game in the battle, and the level will be shown in both your cards and your opponent’s cards.

This is the most difficult part, especially when you are already in a higher rank. You need to think of some strategy, the strategy is simple since you cannot control which card you want to deploy, you can decide when to merge and what stage you should merge to.

You will see that your opponent sometimes doesn’t merge their cards and upgrade their power level. Instead, this is what you should do too. Decide and consider, is your mana worth another deployment or if it is better to use it for a power level upgrade.

Rush Royale: Tower Defense TD is a tower defense game, but at some point, it can turn into a competitive multiplayer game. With the PvP feature, the game trains the players to prepare themselves to face a much stronger opponent. From the start, players can already see that the game is very competitive, and with the ranking system that the game has, players, can see that in the future, they will be facing a much more challenging game.

What do you think about this Rush Royale: Tower Defense TD PvP Guide? Let us know your opinions in the comments below! 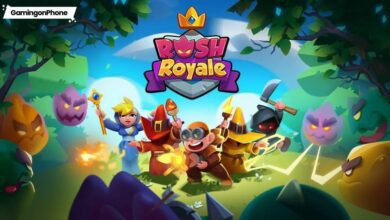