The Joint Operation event Angel of the Iris was launched by the naval shooter mobile game Azur Lane on June 30th, 2022, and runs until July 13th, 2022. This update introduces three new shipgirls, including two Vichya Dominion Super Rare characters. The Angel of the Iris event also delivers brand-new attire, furniture sets, and rewards throughout the event.

From June 30 to July 13, 2022, the Angel of the Iris celebration will take place. To beat Joffre during this event, every Commander on the server must cooperate. There are four levels of difficulty on the event stage: Easy, Normal, Hard, and EX. Commanders will accrue more Contribution Points as challenges become more challenging.

Commanders can earn a variety of event rewards, including the Joffre Model, the Elite gear Dewoitine D.790, and the Super Rare Design Bréguet BR.810, by completing stages and earning Contribution Points. Additionally, all server-wide Commanders will receive the Super Rare item Angel’s Feather as a prize for defeating the boss.

The Forest of Fables mini-event is also introduced in this version, in the interim. Every day until July 6th, the event missions will become available. Commanders can obtain the furniture item Sleeping Bear by accomplishing them all.

Azur Lane to introduce three new characters in this event

Two Super Rare characters and one Elite character are invited to the Angel of the Iris event. When Joffre is above the Flagship on the battle screen, she can conduct a special airstrike with fighter planes. Joffre is featured as a Super Rare Aircraft Carrier from Vichya Dominion.

She can use torpedo bombers to launch a targeted airstrike if she is underneath the Flagship. L’Indomptable, a different Super Rare shipgirl from the Vichya Dominion, with increased Firepower and Torpedo and may launch a special attack every five seconds.

New skins make their way to the event shop

This update adds five new skins: Ensorcelled Snow White for Joffre, Little Red Riding Hood’s Worries for L’Indomptable, The Gray Wolf’s Ploy for Jintsuu, Romeo or Juliet? for Biloxi and The White Rabbit of Wonderland (L2D) for Shimakaze. When a player logs into Azur Lane during the event, they can earn two rental outfit vouchers.

Each certificate is valid for the aforementioned skin types: Shimakaze’s The White Rabbit of Wonderland (L2D), Joffre’s Ensorcelled Snow White, and L’Indomptable’s Little Red Riding Hood’s Worries are all examples of short stories. Additionally, the Shop now sells the brand-new Fairy Tale Forest furniture set and Gear Skin Box, both of which have a fairytale theme.

Are you excited about the Azur Lane Angel of the Iris event? Let us know in the comments below! 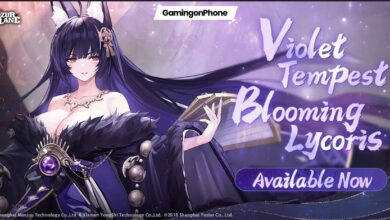