NetEase Inc and Warner Bros. Interactive Entertainment announced a partnership for the development of their upcoming strategy game, The Lord of the Rings: Rise to War.

The Lord of the Rings: Rise to War will be based on the iconic trilogy of books by J.R.R. Tolkien. The game will recreate the fictional world of Middle Earth in all its visually stunning glory along with iconic characters and locations.

NetEase, along with rival Tencent and other gaming firms, has seen games revenue soaring during the COVID-19 pandemic. We know very little about the game right now. With this NetEase aims to expand its domestic market & derive more proceeds from overseas markets.

Despite being based on a wildly popular adaptation, the initial response to the game has been quite negative. Fans are disappointed & worried about potential in-game purchases. Others think a mobile game is the antithesis of the series. There are many who would much rather play a console game instead.

Are you excited about LOTR finally coming to the mobile platform? Let us know in the comments down below your thoughts about the game?

If you are looking for information on more upcoming mobile games, feel free to check our listing! And for more mobile gaming news and updates, make sure to follow GamingonPhone on Facebook, Twitter, and Instagram

Tags
Lord of the Rings Rise to war 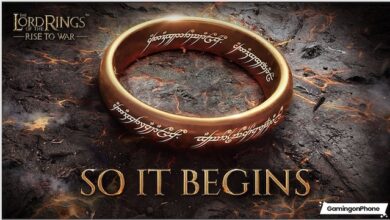 The Lord of the Rings: Rise to War Beginners Guide and Tips

Lord of the Rings: Rise to War is set to launch on September 23