Tactics are always essential to any football-manager simulation game. Although Dream Score doesn’t appear as an authentic manager game, it still possesses one of the key features many manager sims have, tactic management. This tactics guide will go through all the tactics in Dream Score and what they actually mean in the game.

What are the Tactical Presets that you can use in Dream Score?

The game has already set out some presets which you can use initially. You can’t modify the individual elements but the tactics have already been built, which means you can trust them. Here is what each of those tactics actually do, and the ways in which you can get the most out of them through team selection.

This is a very basic and simple tactic, not too offensive, not too defensive. If you don’t seem to get along with any of the tactics above, this can be a perfect tactic for you. Also, if you are a new player just starting out and you just want to get to grips with the game first, this tactic is also a great choice for you. Any formation and any players would work here.

Each of these tactics presets are just pre-made saves of settings> You can make your own settings once you reach the required level to unlock the Custom Tactics section. Here is an explanation of what each of those settings actually means.

This is all about how your players shift from defending to attacking once possession is won back. A low value means that the players will take their time and move the ball slowly but more carefully. A higher value means that players will aim to charge forward as fast as possible in an attempt to catch the opposing team off-guard

These are the areas in which your team will attack from. You can either choose a more central approach or a wider approach. You can also choose the desired sides from which you wish to attack, left, right, or both. Choosing just one side will allow you to get the most out of the players on that side, but it may make you more predictable for the other team.

This is all about how strong your team defends. A high value causes your players to be much more ruthless and reckless when defending. This means they may be giving away more fouls, but the chance of winning the ball back. A low value causes your players to play much safer, which gives away fewer fouls, but the chance of reclaiming possession is lower.

This relates to how strict or loose your players are whilst defending. A higher value can pull players out of position, but it will apply much more pressure on the opposition. A lower value promotes discipline, but it also means that your players can get easily caught out since the opposition will have more time to think.

These settings are all based on the positioning of individual players. For each role, you can choose how you want that player to position themselves on the pitch. This is all up to you, based on the skills of the players and how well supported they are.

Did you find this Dream Score Tactics Guide helpful? Do let us know in the comment section below! 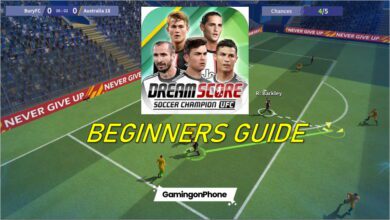