Pixel Gun 3D is an Action Battle Royale game well known for its huge collection of guns. You will find all kinds of weaponry ranging from standard mini-guns to even fidget-spinner launchers. Here are the best weapons in Pixel Gun 3D that you can buy with coins from the armory from each available class.

This rifle fires bullets that cause a small amount of area damage and so you don’t have to accurately hit every shot to deal damage to your enemies. On top of that, the bullets travel instantly, which means that you will be able to accurately fire from long distances. This is a great weapon for beginner players since it is very forgiving in terms of how accurately you can hit your shots.

There is nothing like a raw, fast-firing mini-gun. It will function just as any mini-gun. Fast fire rate, high damage but low mobility and accuracy. At close range, this gun will shred your enemies, however, do keep in mind that there is a short delay when you first hold fire. This is to get the barrel in the gun rolling, keep that in mind when you approach enemies.

This gun functions a lot differently than other weapons in the game. It combines the mechanics of a shotgun with a mini-gun, essentially the gun fires multiple bullets like a shotgun, but at a high fire rate. Mobility is of course quite low, but the gun does cause serious damage up close. Since it has the shotgun element, the range is short as well. Overall, this gun has the potential to destroy enemies in close quarters.

This fantasy-themed weapon fires purple particles that have instant travel time and they do area damage. These 2 features put together to make this weapon great for long-range combat. However, there is a delay input, which means that once you switch to this weapon, you will have to wait about half a second before you can fire.

This is a more futuristic-themed weapon that fires bursts of bullets with instant travel time. With each shot you will see 5 bullets being fired in a burst, the damage is decent as well. This is a great weapon to be used solely as a back-up for finishing off enemies.

These 2 duel pistols fire basic bullets that deal decent damage at a decent fire rate. All the weapon’s stats are quite balanced, what makes this weapon stand out is that there are 2 of them. Duel pistols can be very effective if used properly, you are essentially doubling the stats of a normal pistol. A perfect weapon to use for beginner players.

This is a very fun weapon to use and it is almost as effective. It has a slow fire rate, however, the damage it can do is huge, which makes it one of the best weapons in Pixel Gun 3D. The player throws the Yo-Yo, as it moves, it damages every enemy it touches and then it is pulled back towards the player, damaging enemies on its way back as well. It also has the ability to attack through walls and the hidden chainsaw on the Yo-Yo can even cause multiple hits in one go. Overall, a very fun weapon to use.

This is essentially a close-quarter sword dealing high damage. It also has great mobility which enables some very effective stealth attacks. On top of that, it has a burning trait, which means damaging an enemy will cause them to burn and lose health slowly over time.

This weapon attacks enemies in close range for as long as the trigger is held. The continuous damage is very effective, especially among grouped up enemies. To add to that, the grinder has a bleeding trait, which means damaged enemies gradually bleed out and lose health.

This laboratory-themed weapon fires orange lasers that can pierce through enemies and ricochet off walls. Although the fire rate is quite low, the dame is very high and so an accurate shot is definitely worth it. Keep in mind that you will have to be precise with your aim since once you fire, you’ll have to wait sometime before firing again.

The sci-fi-themed cannon fires energetic particles dealing decent damage in return for slow bullet travel time. Fire rate is slow, however, the gun has the chain-shot trait which means that damage from one enemy is passed onto surrounding enemies if there are any. Overall, this weapon is very effective in close-quarters especially if there are grouped up enemies.

This is a pre-historic blowgun that fires poison darts as the name suggests. However, the twist is, these darts are invisible, hence would find a place in one of the best weapons in Pixel Gun 3D. On top of the high damage it causes, the darts also cause the poison and the slowdown trait, causing serious damage if hit accurately. It is a 2-body shot due to the poisoning and a 1-shot to the head.

This is essentially a railgun; bullets are charged, the longer you charge them, the higher the damage they cause. It has a 10x scope allowing for huge range, as well as instant bullet travel. It is recommended to use this gun in larger-sized maps due to his high damage per range.

This is a standard futuristic sniper rifle that is very well-rounded as a long-range weapon. The damage is decent, unless the enemy has weak armor and health, don’t expect one-shot kills. However, this rifle does have the ability to fire through walls. It has a low capacity so you should make every shot count. Overall, a greatly balanced weapon for starter players.

Rather than being a sniper rifle, this is a bow and arrow kind of weapon. It fires arrows that damage enemies as well as trigger an effect on them, such as poisoning, burning, or bleeding. In any case, the enemy will simply lose health over time. The arrow fires silently and has instant travel time, allowing for great stealth attacks.

This toy-themed weapon fires bombs which fly up after firing, after that they begin to ricochet off objects and walls until it hits a person. Ince somebody touches the bomb, it will explode causing a huge area of damage for a large radius. If it touches nobody, then after a while it will explode on its own. However, even though the bombs can destroy enemies, you and your teammates are also at risk, so use the weapon carefully.

This is a cannon that fires colorful projectiles with high direct damage as well as a large radius of area damage. On top of that, the cannon offers a knock-back effect to enemies you hit which can help in disorientating them. This heavy weapon has the potential to 2-shot kill enemies, so it is very powerful.

This rocket launcher fires 6 rockets every time you press the fire button. Each rocket travels fast (but not instant) and causes a small bit of area damage as well. The only issue is that there are only 6 rockets available as capacity. Nevertheless, when used at the right time, this weapon will deal tons of damage to enemies.

Did you find our best weapons in Pixel Gun 3D guide helpful? Let us know in the comment section below!

Now I don’t think prototype belongs in there especially if no upgrading.

I think thunderer is godly and anti hero sniper rifle is too.

I think for the heavy and sniper there should be the BFG and the Aphrodite’s Crossbow.

me after seeing this: *inhales* BOI THIS IS THE WORST BEST WEAPONS 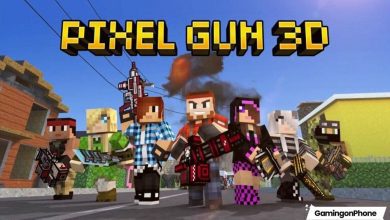