Like other RPG games, having a strong hero that suits your roster is essential to ensure your journey. It is important to have a hero that synergizes with their fellow teammates or having a hero that has the capabilities to carry through the whole battle due to its skills effect, or it’s passive.

In this tier list, we will give you a good insight about them in the Reincarnation M: Sorcery Fight hero tier list and we will give you a good insight about the best hero that is recommended to put into your roster. There will 4 tiers (S, A, B, C) based on each type. There are Human, Spirit, Deus, Demon, Sorcerer, and Devil classes present in Reincarnation M: Sorcery Fight. They were put based on their skills and the effect of their activated synergy in the battle.

Best meta heroes in Reincarnation M: Sorcery Fight for May 2022

We put the Best Heroes that you can consider in your strongest lineup. They were chosen based on their ability and their impact during the battle. Therefore, we will give you the 5 best-recommended heroes that came from different classes.

Masamune is a highly-skilled fighter who prowess high damage per second (DPS). One of Masamune’s signature passive is that once he managed to strike the enemies, his attack will prevent their HP from healing, giving you a high chance to finish them in one strike.

Came from the spirit faction, Neptune is the strongest tank in Reincarnation M. One of his signatures is his ability to gain immunity from enemies’ crowd control attacks, and let his fellow teammate gain the cc immunity as well. Moreover, his ultimate skill will stun enemies with dizziness for two seconds.

Alchemist Master is the strongest support due to his ability to heal his teammates while increasing their attack status at the same time. His passive ability Tonic will increase his teammate’s critical attack damage, making him very reliable in regen while dangerous in supporting his teammate’s attack.

Lu Bu is a reliable tank especially when you face a much tougher opponent. By sacrificing his 10% HP, he will regenerate a shield that will protect him while absorbing all of the enemies’ attacks.

The fact that she is the only Sorcerer in Reincarnation M makes her become special. Her high regeneration ability will support her teammate in the battle while she has massive damage per second that can eliminate multiple enemies in no time.

Lucifer is very dangerous once he becomes your roster due to his ability to do a poisonous attack. His snake poisoned has an 80% chance to poison a target, not to mention that his attack stats will increase every turn.

Having a good formation is essential to clear the Reincarnation M: Sorcery Fight in no time. However, it is also essential for you to have a suitable hero that has great abilities and ensure your victory just by its presence. However, you can also create your own experiment by having different formations and different heroes in each stage to determine the comfort heroes that will accompany you until the end of your journey.

Read our other articles on Role Playing Games here

What do you think about our Reincarnation M: Sorcery Fight Hero Tier List? Let us know your opinions in the comments below! 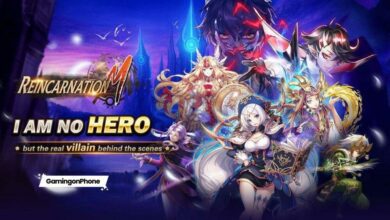 Reincarnation M: Sorcery Fight Free Codes and how to redeem them (May 2022)