Ultimate Golf is the latest addition of Miniclip to its sports genre. The game promises to provide you with realistic Golf gameplay with an endless variety of courses. The game has many modes to offer like Multiplayer duels, tournaments, and an exciting Golf Battle Royal mode. Like all Miniclip games, a lot of features and rules from the real golf game are added to this 3D simulation, giving players a rich Golf experience. If a player has previously played a Miniclip game like 8 Ball Pool, this game would surely stimulate some interest. The gameplay is a little simpler, but to the players who are new to the sports genre of gaming and finding difficulty understanding the game, here is a Beginners guide to know the game better and all tips and tricks to become a pro in Ultimate Golf

In the game, the player competes against another player to putt the ball in as few plays as possible. To be the best in the game, a player needs to practice a lot.

How to Win in Ultimate Golf

The player with the minimum number of turns/shots/plays to putt the ball in the hole is the winner.

In the case of a tie, the two players will take a play each. After playing the shot, the player with less distance between the ball and the hole wins.

In Aim Mode, you are able to have an aerial view of the ball’s trajectory course before you swing the club. This helps you to position the ball, where you want it to land, and the direction. This view also shows the final position the ball needs to be put in, the entire golf course showing the rough patches, the sand, etc.

So, in this Aim Mode, you decide the position where the ball will land after it has been hit. The trajectory shown is quite accurate to expect the wind factor taken into account. That is where the skills of the player would be tested.

After aiming, the player would need to hit the ball. Here comes the complexity in the gameplay. First, tap the swing button on the lower right corner of the screen. The player has to drag the ball back to the circle until it glows green.

The player needs to perfectly align else it may go farther or shorter depending upon the position. After aligning, release the ball once the pointing arrow is in the dead center, else it may go right or left as per the position of the arrow when you release.

Play with the wind

Draw/Fade is when the ball curves gently to the left/right after it is hit.

How to add Sidespin, Topspin, or Backspin to the shot

Here are some additional tips and tricks to guide your way to victory in matches and become a Pro in Ultimate Golf.

1. Never rush while taking a shot

Consider, the wind speed, the landing area, the course, etc. before taking the final shot. Also, take time and release the ball when the arrow is in the green zone.

Clubs have special attributes like spin, strength, etc. The more distance, the player covers in the first shot, the easier it is to putt the ball.

Regularly open bags to obtain, club pieces, and coins. This may help the player get better clubs.

The more the player plays, the more acquainted s/he becomes with the wind speed and club attributes. Therefore, practice a lot to be the best in the game

Ultimate Golf is a fairly simple and easy-going game. Here the gameplay is completely independent of the opponent as to how the opponent is playing, isn’t going to affect the way of your play. The winning is dependent on the skills and the acquaintance of your gameplay. The game will be popular among the players who want to enjoy the game of golf. The games are simple and finish quickly so not much time is consumed. It will also be a great time killer for many players, through its simplistic yet realistic gameplay.

Please feel free to ask any questions in the comments section below, I’ll make sure to reply to everyone. Hope you find these Beginners guide useful for playing and winning in Ultimate Golf

For more Mobile Gaming news and updates, join us at WhatsApp group, Instagram, and Twitter. And feel free to join the discussion at our Discord.

When I land on the fringe, the game selects a lofted club. Sometimes I would rather use a putter. How do I change to the putter?

You can’t actually. The clubs are switched automatically in the middle of a course. The clubs are selected automatically according to the distance from the hole and there isn’t any feature available to switch the club. Even clubs that work within the same distance can’t be switched. I hope they add these features in future updates. Like you, many players would like to change clubs during the match.

I realize the Nautilus Diver has more accuracy and draw/fade ability but the Outlaw Driver has more distance which is the primary objective of a driver. Why is a less powerful driver a higher ranking/ more expensive club?

It’s true that the primary objective of a driver is to cover the maximum distance but then again you have to consider that there are factors like wind speed, course structure, etc. where being accurate and landing on the right spot also matters. Also using the draw/fade is what separates pro players from amateurs. And there isn’t much difference in power between the two clubs but the difference of other factors really makes the decision.

i players a tourenement enden with 25 place . they shou\w i got a price but how can i get the price an add the coins to my account. win is 1540 coins but no chance to add them to my left coins (86)

What are the rings distances from center of where the ball would drop? Does it move in incriminates of 3. 6, 9, 10? And where does the distance start/ stop, on the outter edge of the first ring or or in the center of each ring?

Need to know for wind adjustment and tired of trying to experiment to figure it out.

The rings indeed help in adjusting the wind factor and it is around 1.5-2 mph. But it is not certain as we have to also take the accuracy into consideration. That’s why it doesn’t always land in the expected spot. We also have to consider the distance, i.e. if the ball is nearer to the landing spot then the wind effect is less and if it is more the wind effect is more.

Yes I understand that but in the picture what would be the ring distances from center cup/ center ball…there has to be a reason for the rings and those would change if the ring is smaller or larger but there should be a standard..meaning if I was driving what would the ring distance be regardless of wind speed?

So if looking at the center ring (the inner circle) based on long distance range it would go 0 to 3 to outer edge..and from the 3 mark it might go to next outter edge of say 6 so that 4, and 5 would be inside that ring…and so on. The rings seem to stay the same based on range..meaning if driving far then big rings but if close to hole the rings are smaller meaning the ranges might change…but there should be a standard again regardless of club or wind speed..if not then it defeats the purpose of having… Read more »

OK thats what I was wondering…thank you for responding….I would say so far when the rings are large that it does appear to be what I described in the screen shot..if not its pretty close from my experiences when testing it.

After that I’m not sure and the above is not fully confirmed but again if I use those increments I’m fairly close to the place the ball lands.

I’d like to be able to practice without playing in a competition or Head to Head. I read the Tips and tip 4 it says.

4. Practice more and moreThe more the player plays, the more acquainted s/he becomes with the wind speed and club attributes. Therefore, practice a lot to be the best in the game

I can’t find out how to get into practice mode. Can anybody help?

There is no practice mode as of yet. Miniclip may introduce this mode in the future updates, but as of now only way to practice is to play the head to head mode with the lowest bet. 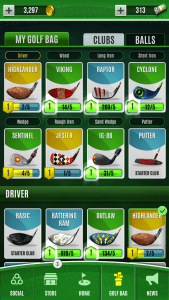 Having trouble buying a better club. Any tips?

Among Us Guide: Tips and Tricks for figuring out the Imposter