Boom Beach Frontlines is a 9v9 strategy title developed by Space Ape Games where two teams battle with one another to capture the secure points first and win the battle. Boom Beach Frontlines has a set of commands which serves its purposes in the game, ever got saved by an awesome medic and want to appreciate their effort double tap on the medic to convey them your thanks.

Double tapping on the medic will trigger a pop-up message “thanks doc“ for assistance.

Double tap on a teammate for a “nice one“ pop-up message indicating appreciation for their assistance.

Indicating the teammates to assist you in battle. Can be used while taking on enemy troops, vehicles, or defense. Appears as a “assist me!” pop-up message.

Double tap on enemy troop, vehicle, or defense to indicate that the team should focus their attacks on that represented by the “knife sign“.

5. Double tap your headquarter or defense

Double tap on your headquarter or defense to indicate the team to protect the defense or headquarter, represented by the “blue shield“.

Double tapping on sandbags indicates that you want to take cover or want the team to take cover when under heavy fire, represented by the “yellow shield“. Note: Sandbags reduce the amount of damage taken by 75%.

7. Double tap on the non-taken vehicle

Double tap on the non-taken vehicle to indicate that either you are taking it or someone in your team needs to take it for an attack.

8. Double tap anywhere else on the map

A and B are at the top left corner of the screen. Tapping on a capture point that hasn’t been taken will represent that the team should head there. 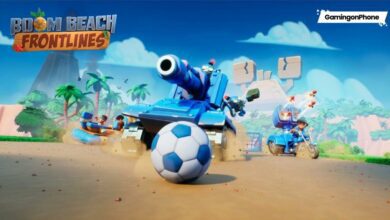