TEPPEN is a game from a collaboration between Capcom and Japanese game developer GungHo Online Entertainment is a collecting card game with its character taken from Capcom games. Inside the game, you will see very familiar characters. We will help you by providing our TEPPEN tier list of the heroes in the game.

You can choose one of them as your main hero and build your own card deck using other characters that you get from the card pack in the game. We will rank all 16 available heroes in the game in ranks. Like all games with many characters, there will be a rank of the strongest or the best one to the weakest or the worst one, here, we will provide you with that.

This TEPPEN tier list should only be taken as a reference because different strategies and compositions can yield different results for players. This tier list will be separated into categories of S, A, B, and C as follows:

Best Meta Heroes for TEPPEN in May 2022

These are the heroes with the most advantageous stats and abilities in TEPPEN as of May 2022.

Known as the King of Skies in Monster Hunter game, it becomes a red element hero in TEPPEN. Rathalos has three different hero arts:

Who doesn’t know this fighter from the famous Street Fighter series? Ryu, the fighter is well known for his Shinku Hadoken, Denjin Renki, and Metsu Shoryuken. In fact, in TEPPEN he appeared as a red element hero, and his well-known techniques also become his hero arts in the game.

Another well-known character from the Street Fighter series. Chun-Li in TEPPEN is a green element hero. Her hero arts are:

Every Resident Evil fan should know this character from the first time entering the game. Jill Valentine is a red element hero in TEPPEN, and her hero arts are:

The beautiful character, Ada Wong is from Resident Evil Series. In TEPPEN, she is a purple element hero with hero arts as mentioned below:

The Devil Hunter, Dante this white-haired man is an iconic character from the famous Devil May Cry or DMC for short. In TEPPEN the Devil Hunter is a purple element hero. Dante has hero arts:

Our next hero called X comes from an amazing series, Mega Man X. In TEPPEN, X is a green element hero. His hero arts are:

Another hero, Nero comes from the Devil May Cry Series. Nero in TEPPEN is a green element hero. His hero arts are:

After X joined TEPPEN, Zero comes along. In Teppen, Zero is a purple element hero. Zero’s hero arts are:

Albert Wesker is our next hero. He comes from Resident Evil Series, in TEPPEN he is a black element hero and has hero arts, which are:

Oichi is a black element female hero that comes from Sengoku BASARA Series. In TEPPEN, Oichi has these hero arts:

Akuma, is a demon that comes from the Street Fighter Series. In TEPPEN, Akuma’s a black element hero, his hero arts are:

Amaterasu is a fox-like divine guardian from the Ōkami Series. It is a red element hero and it comes to TEPPEN along with its hero arts:

If you are a Monster Hunter player, you will see this cat-like creature, Felyne almost everywhere and anytime, this cat already feels like a mascot to the game, and one of them has come to TEPPEN. This cat is a green element hero. This cat has hero arts like mentioned below:

In TEPPEN you need to be very careful in choosing your hero. Every hero has their own skills or in this game, we can call it hero arts. The TEPPEN tier list above is a tool for you to help you choose your hero, because this is a card game, your hero does not actually do the actions, they will need cards to help them fight and provide and help the cards with their hero arts.

Some of the aspects of the game mentioned above such as Veil, Graveyard, and so on are only learnable when you are playing the game, sadly there is no information about them even on the official website.

What do you think about this TEPPEN Hero Card Tier List? Let us know your opinions in the comments below! 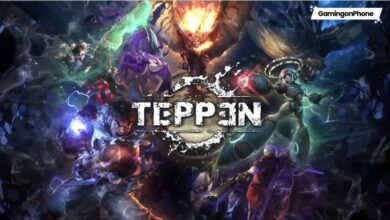 TEPPEN Guide: How to transfer your in-game data across devices