The latest Pokémon Unite event was featured in a trailer that debuted yesterday morning. Greedent, a new forthcoming character, new Holowear, loads of cosmetics, and a Halloween-themed visual revamp were all featured in the clip. However, some fans captured Pokémon Unite developers teasing the release of more new Pokémon in the game, and one such rumor is the possible release of Decidueye. This would support the data miners’ predictions which happened a few days ago.

In the Halloween Festival event trailer, Rowlett, the first evolution of Generation 7 starring Pokémon Decidueye, is carved into a pumpkin. This might just be an easter egg, but according to the 1.2.1.7 leaks from @eclipse_TT, (Skwovet’s evolution), Greedent will be entering the game in the Halloween update, which was announced yesterday in the video. So this is a piece of good news for those who want to see Decidueye as a playable character in the game.

Misdreavus and Shuppet also spotted in the trailer

Misdreavus and Shuppet were another pair of Pokémon discovered by fans in the teaser, in addition to Greedent and Decidueye. However, there have been no leaks or data mines indicating the arrival of these Pokémon, and we never know what will the Pokémon Unite devs have in store for the players in the future.

Pokémon Unite’s Halloween event will take place from October 20 to November 7, bringing a plethora of cosmetics, fashion items, Holowear, and a general aesthetic update to the game. The Halloween decorations on Mer Island will be alive tomorrow, with a few Pokémon also being buffed and nerfed in the latest update.

What are your thoughts about the rumor of Decidueye arriving in Pokémon Unite? Let us know in the comment section below! 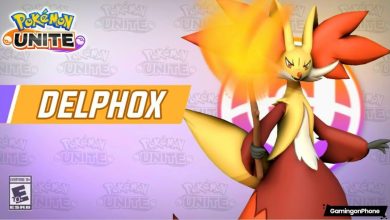