Dynasty Legends 2 is an action game and ARPG genre game developed by HK Taihe Interactive Limited. This game is perfect for those of you who want to play action games with the background of the Chinese dynasty, especially those of you who want to reminisce about playing the game Dynasty Warriors. This game brings you to have a strong officer or with a high BR potential, to make it easier to complete all existing quests. we have summarized the officers from Dynasty Legends 2 according to their strengths in this Tier List.

This Dynasty Legends 2 Officer Tier List should only be taken as a reference because different strategies and processes can yield different results for players. This tier list is divided into categories of S, A, and B.

We recommend several officers that you can use in your team, especially in PVP combat because during PVP the enemy will be more difficult than completing quests where the enemy is a system.

We recommend officer Lu Bu as Chief Officer, he was intrepid and unstoppable on the battlefield because his attributes are very overpowered in terms of damage, control, viability, mobility, scope, and utility. Lu Bu has a passive to steal HP from enemies and has the skill to stun enemies for 3 seconds. The most unique of all is that Lu Bu has 2 modes, when using the ultimate, Lu Bu will turn into a Demonic State and acquire new, very useful skills such as skills to jump against enemies, control skills, and skills to inflict other damage.

Since Lu Bu was already very overpowered, a suitable partner for him would be an officer with skills that could support him. We recommend Xiao Qiao as a lieutenant because her skills can restore allies’ HP and summon creatures to attack enemies. Xiao Qiao officer who is very suitable to support his allies.

We recommend officer Zhang Jiao as Chief Officer, who has good attributes. In addition, Zhang Jiao is very strong, especially against many enemies at once because his skills are very good in terms of AOE.

As his lieutenant, we recommend officer Yuan Shao because they have a bond with each other which can unlock bonus attributes. Not only that, Yuan Shao has a skill that can add a shield to his ally’s sword that can take damage around it.

We recommend officer Pang Tong as Chief Officer. Pang Tong is very good at attacking from a distance through his fire bazooka, his skills are very good in terms of dealing damage, and has a passive that can restore 60% of his HP.

When Pang Tong attacks from a distance, the lieutenant must be a melee attack type officer, we recommend Dong Zhuo as the Lieutenant. Dong Zhuo is a very strong officer in terms of defense, therefore when you as the Chief Officer attack from a distance, then the affairs of close combat are given to Dong Zhuo.

Dynasty Legends 2 is a game that can make you think about the strategy and composition of the officers when going to battle. Therefore, the selection of officers must be right, by exploring to find the right composition.

What do you think about this Dynasty Legends 2 Officer Tier List? Let us know your opinions in the comments below!

Where is cao ren in the list? The one using big shield 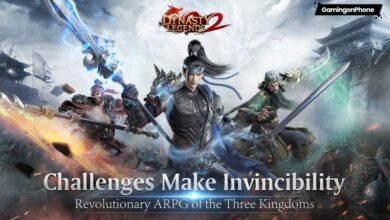