The brawl games are grabbing the position of a top-tier choice list. As they offer short-time gameplay, filled with intensity, supports battle royale, and many more, both casual and professionals keep them on their shortlist. Frayhem, developed by Gearage Studio, is another 3v3 brawl game to join the club. As the game is comparatively new to other brawl games, we made a tier list to rank the characters from the best to worst. We hope this Frayhem character tier list will help the players to add more fun while playing. You can check our basic guide as well to get some tips and tricks.

Railey has the special ability to find enemies hiding in the bushes or taking cover in dark alleys. This epic fighter loves to sit down in a plain field and wait for a suitable target in the line of fire. Her level 1 attack ability includes a basic version shot that deals 675-2025 damage with the maximum charge. She can’t move while aiming but with the invisibility skill, she can be a nightmare to her enemies.

Nymph is a healer to her allies and an equally effective killer to her enemies. Pray you don’t make her angry, might cost you your precious life! She has four types of attack skills namely Nature Bolt, Outgrowth, Curative Properties, Constancy. The basic attack Nature Bolt fires a bolt that deals 336 damage and poisons enemies, dealing an extra 672 damage for 2s. The bolt may be poisonous to enemies but also heals her allies 210 health instantly, and then for 420 health for 2s.

One of a kind fighter. Her eyes glow under her hood. A long tail and big ears made her sneaky and dangerous. The sly Foxy loves to surprise others by suddenly appearing out of nowhere. Her basic attack is Dash as she is a stealthy hero. She dashes forward, dealing damage to all the enemies she can make contact with. Dash distance and damage increase the longer she dashes. Damage increase from 560 to 1120.

He used to be an average chemistry school teacher. A tragic incident led him to use his knowledge in darker ways. The basic variation of his attack “Flask throw”, throw a flash full of poison that deals 420 damage on impact. It creates a puddle that deals up to 840 damage over 2s. Leveling up would add various attacks and can deal as much as 1008 damage for 2s. He can heal his allies by his “Special Formula”, which heals 336 over 4s.

She was once a clumsy old doll. She holds the “light” that awakened her. With this in her hand, she enkindles her allies with the warm rays or can burn the opponents to ash. Her basic attack starts with a “Flash up” skill that releases 9 light clusters, each of them deals 112 damage that makes 1008 in total on contact with an enemy, or she applies a “shield” that adsorbs up to 112 points of damage on contact with an ally.

A wolf with steel claws in his hand and a dangerous sword makes him ferocious to his enemies. Alpha leads a pack of one. His self-assuredness allows him to regenerate while tearing enemies apart. The basic attack includes a Claw Sweep, deal 907 damage, and heal Alpha for 50% of damage dealt. The more he attacks, the more invincible he becomes.

Madame is a witch. She casts spells from her book. Her basic serves her clients by summoning mystical creatures. Her attack has a fancy name, Envoy of Chaos, just like her looks. She summons a creature that lies in wait and attacks the nearest enemy, dealing 825 damage.

He has a sad story that made him a boomer. After being constantly mocked by millennials, boomer developed an explosive arsenal to seek revenge. Now, Boom is the last thing those youngins hear. The basic variation of attack uses a bomb, dealing 1050 damage on a precise hit. If it lands nearby, only 700 damage is dealt.

This cunning-looking epic fighter when dashes with his glaives, the best enemy can do is hide and pray he’ll dart past them. As he dashes forward, dealing damage to enemies along the way. Dash distance and damage increase the damage the longer he dash. Damage increases from 560 to 1120.

Katni’s aim is so good, she saves on repellent by shooting bugs dead” her bio reads. Shots different arrows that work differently. Bow shot, Frost arrow, Fire arrow, and Acid arrow are enough to make the enemies cry like hell. In her basic level, she fires a common arrow that deals 680 damage. The further the enemy is, the more damage is dealt. The other 3 types can deal up to 544 damage to a single target or can increase the rate by 15%.

A scary-looking stylish old furball with two big horns in his head. Don’t show anger to him because he can cool down extremely hot heads by burying them in the snow. He uses the Horn strike to attack enemies. Striking the ground with his horn releases icicles, each dealing 320 damage and reducing movement speed for 2s.

Tredd was there when you first entered the game. He came from the wild west where no one will show you mercy. Enforcer Tredd uses his trusty shotgun to bring law and order mixed with destruction and chaos. No one quite understands his metric. From his shotgun, he fires five bullets at a time. Each bullet deals 239 damage. Though you can’t connect all the bullets to a single enemy as they spread. He can be a good friend of yours in the initial stage of the game.

However, some of the fighters only have a single basic skill. No up-gradation to them has been added till now, Frayhem lacks some little details that are not covered yet. Frayhem said that they’ll keep updating the game with new modes, maps, and heroes. The Frayhem character tier list shown here does not include a character’s proper power. Each of them has different roles to play. With an accurate choice to select a fighter according to the map a player is going to play, any character can change your game. We hope this tier list will help you choose the perfect fit. 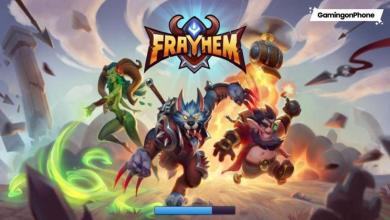