Undead World: Hero Survival can really be quite fun to play and also relax. With that in mind, there will always be some difficult stages that many players may encounter, especially if they are new to the game. These stages may be too difficult for players since they will need the assistance of heroes who can assist the player’s team and turn the tide of battle. And, in certain cases, players may find it difficult to progress and may need to invest in a few chances to obtain stronger heroes in order to progress. With that, here is our Undead World: Hero Survival tier list of heroes to seek, along with a list of which ones will certainly benefit players throughout their journey.

This tier list should only be taken as a reference because different strategies and compositions can yield different results for players. This tier list will be separated into six categories of S, A, B, C, and the legend is as follows:

Though the roster for Undead World: Heroes Survival may be a bit limited, there would always be future updates and patches that may change this later on. Note that this list is based on the global success of all players currently playing it.

This hero can be used both offensively and defensively. What makes her S tier as well as her ability to heal allies during the battle. And if ever she would be slain in battle, another one of her abilities kicks in. This would allow her to resurrect a zombie that would cause massive damage to enemies.

While being in the support role, Astra can definitely do a lot. One of his abilities allows him to resurrect dead allies and also buff them for a period of time. This would definitely help in the long battles and keep players’ teams alive. Other than that, he also decreases the attack of enemies which would get players the win much faster.

Gabriel is a defensive powerhouse that could fit just about any team. He is able to taunt enemies so that he would take the hits rather than his allies. Not only that, but as a tank, he gives out buffs for allies and shields too. He can also provide these heals, buffs, and shields for himself making him one of the toughest tanks in the game.

Players should check the list from time to time to find what best fits their teams. The important heroes to keep an eye out for can also help newer players set up what they need for their team and progress in the future. Players should feel free to mix up and match their teams to find what works best for them. It would be much better for players if they continue to enjoy the game while progressing forward.

What do you think about this Undead World: Hero Survival Hero Tier List? Let us know your opinions in the comments below! 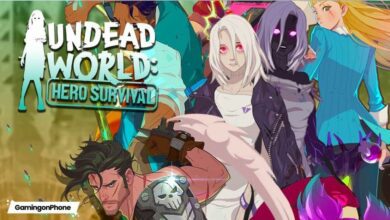 Undead World: Hero Survival free codes and how to redeem them (January 2022)