Karrie is one of the best hypercarry marksman in Mobile Legends. Her skills are easy to understand yet hard to master. But if played well she could be the best carry for your team. But honestly, in the solo queue, she is a little hard to play if your teammates don’t understand her rotation style. She is a burst-type hero so she is weak in ganks but is extremely strong in picking up enemies one by one, which in solo queue is tough to do. So to make it easy to play in the solo queue here is our guide for you. In this guide, we will take a look at the best emblem set, spells, build, including tips and tricks to pave your way to victory with Karrie in Mobile Legends.

Karrie has a basic skill line-up with one passive and three active skills. In this Karrie guide, let’s see what are her abilities in Mobile Legends, and when you can use which skill to get the best out of her.

Karrie’s passive is simple. For every basic attack or Lightwheel Projectile, she adds up a mark that goes up to 5 marks. After completing 5 marks she deals true damage which literally ignores all the shields and penetrates armors. The true damage is equal to 7-13% of the target’s max HP and for the creeps, it deals 300 damage.

Karrie releases a flywheel that deals damage on the way. If the flywheel travels the whole way it will deal less damage. It also slows down the enemies who are hit by it for 2 seconds. This is the only AoE skill of Karrie and it can be used to give continuous damage to the enemies or slow them down on the way and pick one by one and finish them. You can also use this skill to fast clear minion waves and takedown creeps.

This is a small dash of Karrie in which she dashes in a designated direction while releasing a light orb towards the enemies in a range which deals significant damage to them. This skill on hitting also adds up a stack for true damage. The light orb released while the dash locks on targets in range and hit them for sure, even if they ran away to a distance. Using it frequently can deal more damage as it adds up the stacks. You need to give proper direction while using this blink or else you will end up in the enemy’s lap.

Karrie enters dual wield mode which basically increases her movement speed while reducing her attack speed and splits her single basic attack into two. That means she fires 2 light wheels on a single basic attack which gives her more stacks and deals more true damage to the enemies. The movement speed boost makes her more mobile and she can reposition herself faster while giving damage to the enemies.

Karrie is a great burst hero and can pick off enemies one by one easily, but she is very fragile. So you need to focus on upgrading the second skill or the dash first. By doing that the CD of the dash will be reduced and you will be able to dash frequently making her squishy to catch.

Moreover, her dash also gives a significant amount of damage in the process. After reaching level 4 focus on upgrading the ultimate as much as possible. It will help you spam the ultimate and you will be able to provide much True damage needed to melt down the tanks.

Best Emblem Set and Spells for Karrie in Mobile Legends

You can use both the Assassin Emblem and Marksman Emblem with Karrie based on your playstyle. If you want to play the late game or you have tank support, we will suggest you go for the Assassin Emblem as it will provide you with the additional damage and gold bonus, if you secure kills in the early to mid-game. Set up your Assassin Emblem like this.

You can also go with the custom Marksman build where you can focus on the additional movement speed and attack speed that will boost your early game. You can also use this emblem set to play as main or gold laner both. You may consider setting up your Marksman Emblem like this.

If you are planning to play Karrie as the main damage dealer then Retribution is the best spell to go with as it will help you to farm faster.
If you want to play Karrie as a Gold laner then you can use either Aegis or Flicker or Purify based on the enemy pick.

Karrie’s builds are purely dependent on the playstyle and she can be played in various different roles. You play her as hypercarry, an offlaner, or a semi tank mm, she can handle all of it very well. So here is our recommended build for these three playstyles.

For Speed and Damage (Hypercarry)

Karrie is a Mid-game-Late game Hero so don’t rush and play it slow. For hypercarry Karrie start in the mid lane with your tank and ask him to buy ram for sure, or else change the lane. This type of thing mostly happens in the solo queue so be prepared for it. . According to her gameplay, we can break it down into three phases. Our Mobile Legends Karrie guide includes the perfect game plan for the early, mid, and late game in the game. However, a player must need a good understanding of the map to bring the best out of any hero.

If tank buys roam and stay with you in the mid lane, clear the minion waves and go for the blue buff as well as the red buff, along with the camps. This will make you level 4 in less than 4 minutes if you’re carrying retribution with you. While hypercarrying tries to give your offlaner a free lane, or try to move away from the attention from the offlaner. This will help her to get farmed faster and will allow her to push the turrets as well.

Keep on Pokin’! With Karrie try to poke your enemies with your first and second skill, and try to stack out your enemies while poking. Just do not overcommit to poking, if you think they gonna ambush you just get out of there, don’t take risks in the early to mid-game.

They can easily pick you off in the early to mid-game.In the mid-game try to take the Turtle buff. It will give you the gold boost and CD reduction for the ultimate destruction in the late game.

There are very few combos used for Karrie as she is a basic attack-prone marksman, so here are some of the combos that are played on Karrie.

Try to avoid these and farm as fast as you can for the build items that counter damage and melt tanks in seconds. Have a teammate as the company to guard you against high burst enemies and outsmart your enemies. These tips will surely help you to guide easy wins with Karrie in Mobile Legends. You can also refer to our latest tier list to know more about the revamped meta heroes in this current season.

That’s all for today’s Mobile Legends Karrie Guide. Do you prefer to use Karrie in any other way? Let us know in the comment section below! 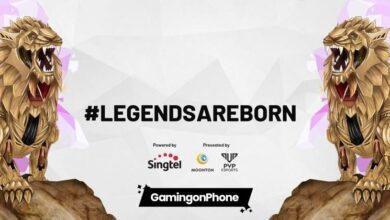 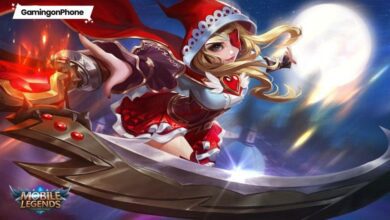 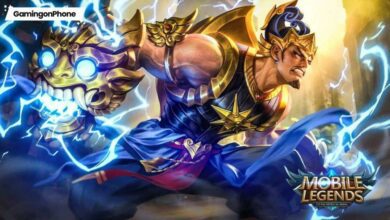